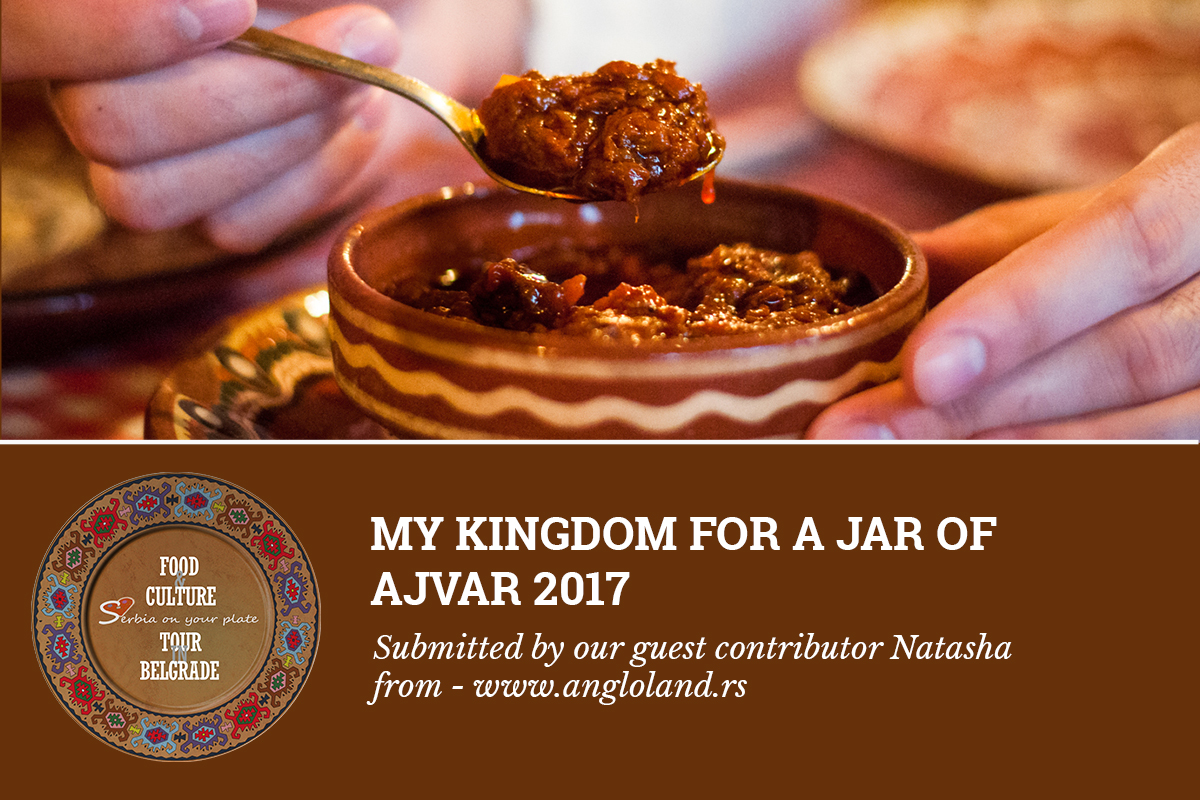 Posted at 20:03h in Food and Culture Tour in Belgrade by maja 0 Comments

A quirky little word of Oriental origin from way back, apparently close to the word “caviar” by its etymology, ajvar is both produced in a number of countries of the Balkans, almost all of which funnily enough in recent years have been vying to claim the exclusivity to the original recipe of this delicious, mouthwatering and most importantly nutritious victuals. In Serbia, however, there is no doubt that the “leskovačkiajvar” owing to the centuries old tradition, the unique climatic conditions, and the sunny days averaging for 270 days per year has a well deserving place.

Ajvar is a pepper paste that goes well if served with soft cheeses and pork to name but a few or simply spread onto a slice of bread for any meal whenever you fancy eating it. The Southern Serbia, mainly centred  around Leskovac region is known as a „land of peppers“ or the „land of paprika“ which is regarded as a traditional vegetable and as such one of the landmarks of Serbia. Ajvar aficionados can choose from sweet, spicy or searingly hot varieties. It certainly is a real gem among all the winter salads in the region.  It tends to be a staple food both in the family meals and/or lavish feasts throughout the year no local seems to be able to live without.

There is more to ajvar than meets the eye or ‘the palate’ in this particular case  – oft mistaken  for a simple dressing or a condiment. It goes well with a loaf of corn bread, chunks of cheese, smoked pork, pljeskavica, a clove of garlic or two, ćevapi, palenta (wholemeal  corn paste boiled in water) but for those who produce and know it ‘inside out’, it has a well deserving standalone place among the delicacies of any feast that comes to your mind.

Let us try and delve deeper as to why  the Serbs and the locals in the region love ajvar so much? Let me illustrate by giving you a detailed description of the whole process. Once the peppers have been picked and roasted, the oft blackened and a bit charred and crusty baked outer layer is peeled off the peppers. After a night of its ‘settling’ for a bit, the paprikas are minced, chopped, chipped, slashed or sliced up in any old, traditional way one might choose to do . Yes, all of these little ‘tricks and stunts’ will heavily depend on the ajvar maker themselves. The peppers are then placed or simply zipped into a rather bulky tin pot, called “kazan” or ‘lonac’. And then on we go : the lengthy process of cooking begins – stirring, sizzling cooking, boiling and then even more stirring seemingly for hours on end. Oil, vinegar, sault and healthy additives are added to season the mixture in order that  the peppers can eventually absorb the aromas. “It should not boil, but fry” with you playing around with a big wooden ladle hovering above the ‘cauldron like – lonac’ all along. “You need to have lots of patience . Make sure you do have lots of energy as well because everything must be stirred by hand ‘ from the beginning  to the very end”. While cooking, which by the way happens to last no less than a few hours, all manner of other essential ingredients are added : salt, sugar, sunflower oil, and wine vinegar to name but a few.

Lest we forget for all those ajvar aficionados intent on going all the way if you are at least moderately fond of hot or very hot peppers in order to satisfy their demand for fire ,ajvar apparently has a lot of analgesic properties , antiviral  and endorphine producing benefits. If you happen to be averse to searingly hot peppers, you take a spoonful of moderate ones and you are certainly bound to develop an affection for ajvar yourself.

Submitted by our guest contributor Natasha from www.angloland.rs